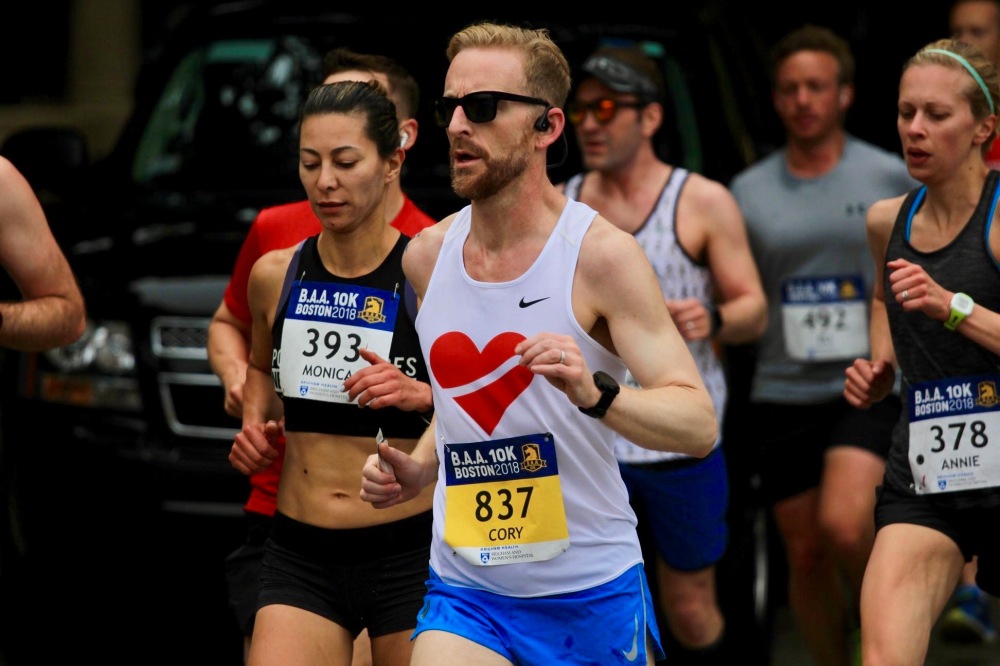 Photo: Me with a serious face as I make my way down Commonwealth Ave in my Heartbreakers Summer Race Singlet

Being a competitive runner can be frustrating sometimes. You can have a perfect training cycle and completely bonk on race day. Sometimes you have a cold, sometimes you didn’t get enough sleep, sometimes you just can’t hit your goal pace and so on and so forth. The only factors you can control are your mindset going in and having a solid fitness foundation to draw on. Learning from mistakes in previous races is also key to figuring out your maximum potential.

One of my goals that I set for myself this year was to set new best times at every distance that I race at. This was definitely a lofty goal that I wasn’t sure I would be able to execute, but I felt like it would give me something big to strive for. I had set every PR besides my marathon PR (if anyone doesn’t know what that means it’s Personal Record) in 2015. I was under 40 then, so I knew beating times I had set back then would require a new strategy. That was when I joined The Heartbreakers . My new 5K PR was set at An Ras Mor in March, my new half marathon PR was at Run To Remember in May & the B.A.A. 10K was up next in my quest. 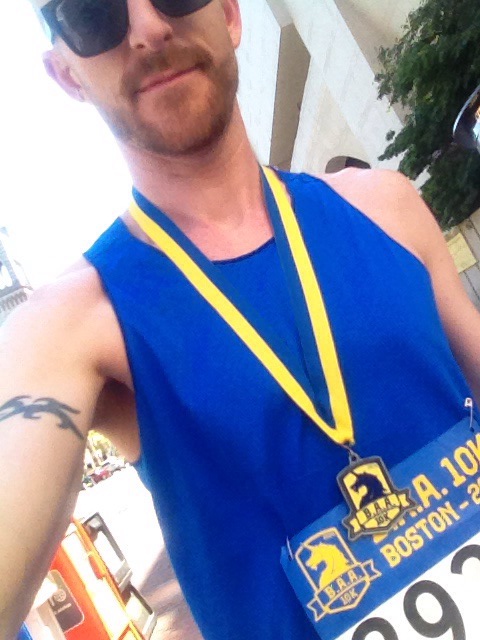 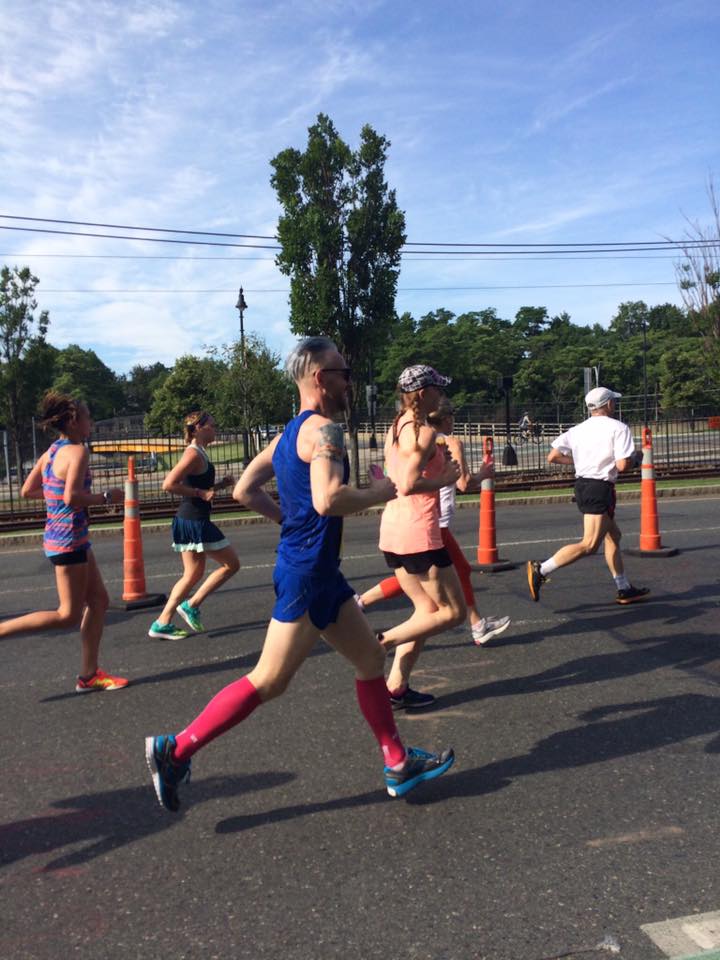 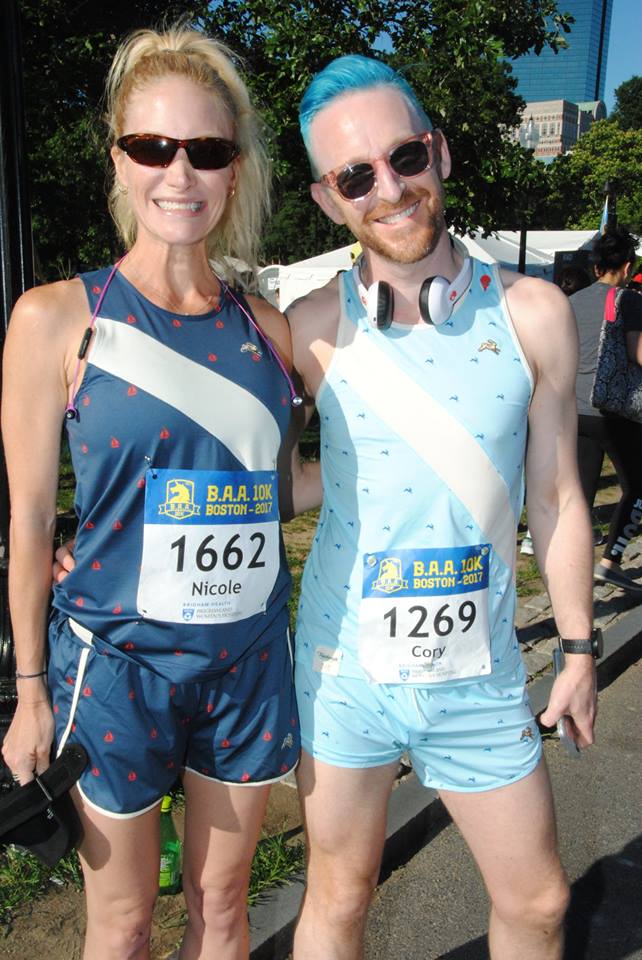 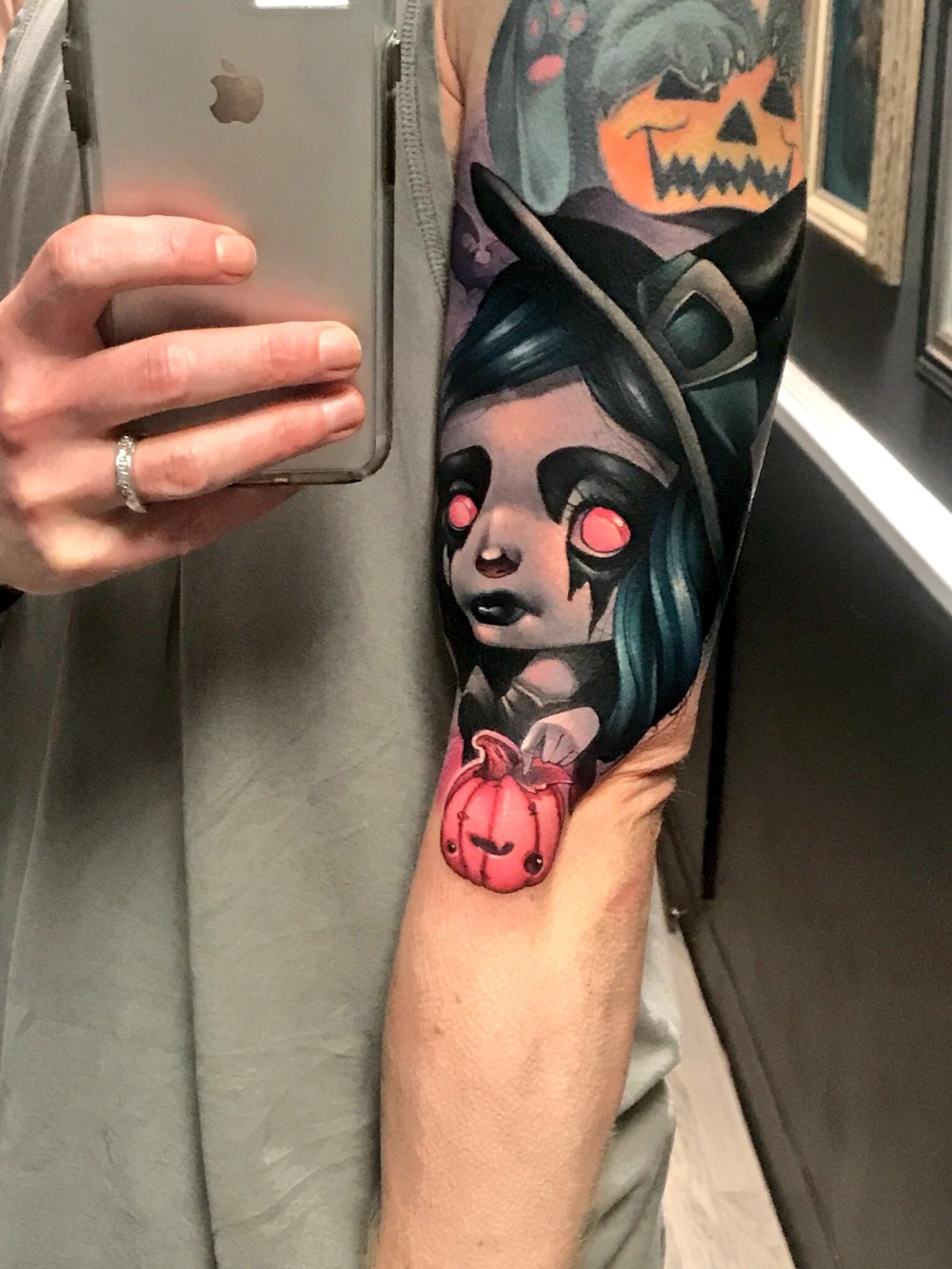 Anyone who has seen the show Ink Master and the spinoff Ink Master Angels will be very familiar with Kelly Doty. She is one of the most sought after tattoo artists in the country and is based in Salem, MA. Our schedules aligned by some small miracle and I was able to get a large piece of work by her done the Thursday before race day Sunday. This was not ideal, as I had been tattooed for 8+ hours and essentially had an open wound on my arm. My body was working hard to heal it and it left me feeling a little worn down. I also had to do my last training run on a Wednesday for a Sunday race. I hoped this would not screw up my well laid plans but didn’t really care because LOOK AT THAT TATTOO!!!!!! 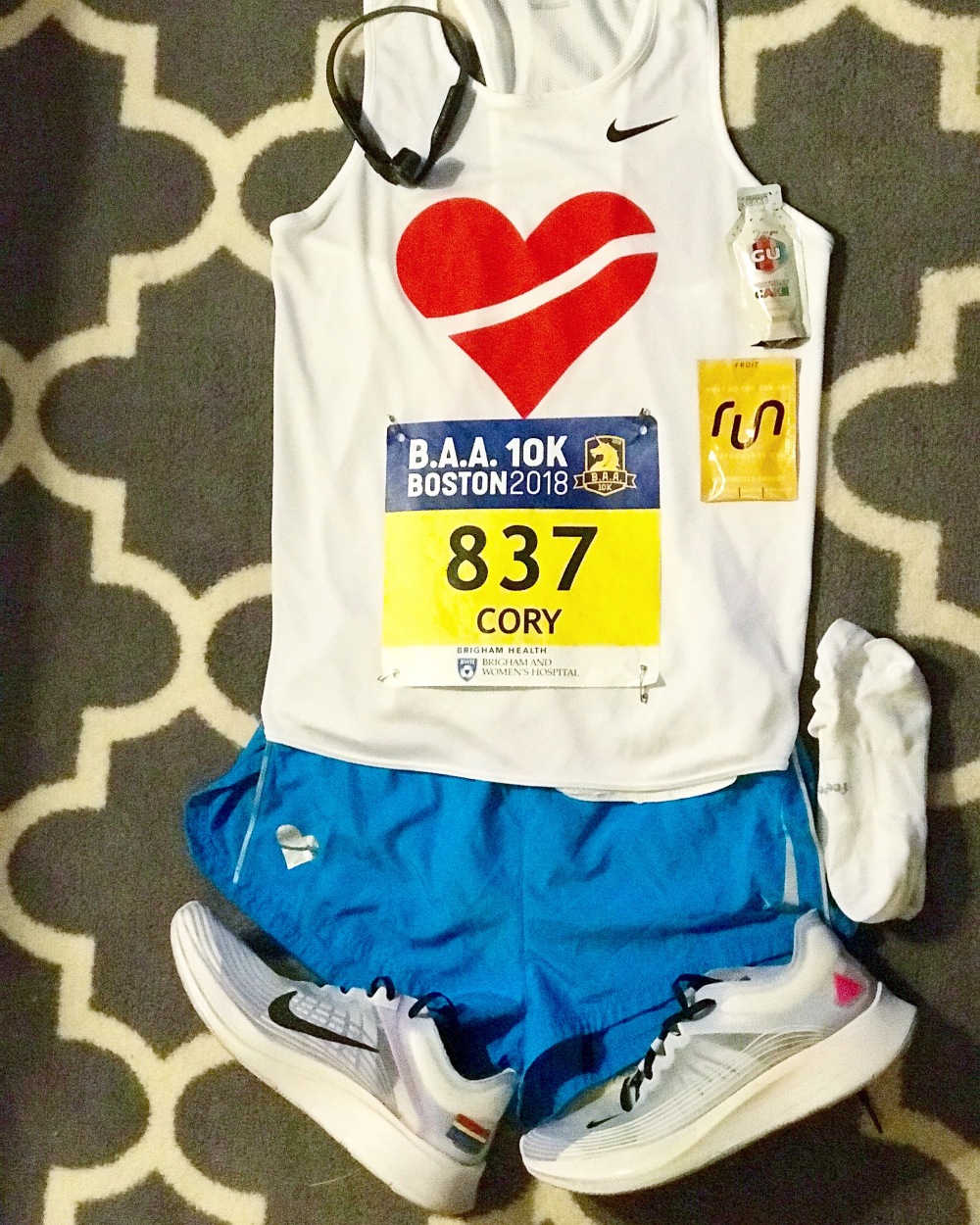 I slept OK Saturday night and woke up feeling pretty good. I had two cups of coffee, a banana and a bagel like I do for anything under half marathon. My outfit was super cute and featured many items I treated myself with for my 42nd Birthday which had just passed. My favorite were the Nike Zoom Fly Be True edition that were made to celebrate Gay Pride month. I don’t know why, but feeling cute in my kit definitely helps me run better and this one was definitely a fav. I left the house fairly early but must have been walking fairly slow because I missed the Heartbreaker Team photo. I was able to see a bunch of my teammates who were still milling around post before we went to warm up.

Those of us who were running similar paces headed towards the corrals together. Logan, who I had run the Run To Remember with in May said he was shooting for something in the 42’s to which I replied I would take anything under 44:07. We went through our normal Heartbreaker warm up and headed to the corrals as soon as we finished our last set of strides. In the corrals, we ran into even more of the team. Tom from the Heartbreakers, who had run most of Run To Remember with me, was right by us. He jokingly told me his only goal was to beat me (I was not going to make that easy). Chad from my pace group on Tuesdays was also with us and we were all soon discussing plans for the race. Five minutes later that gun went off and it was on. 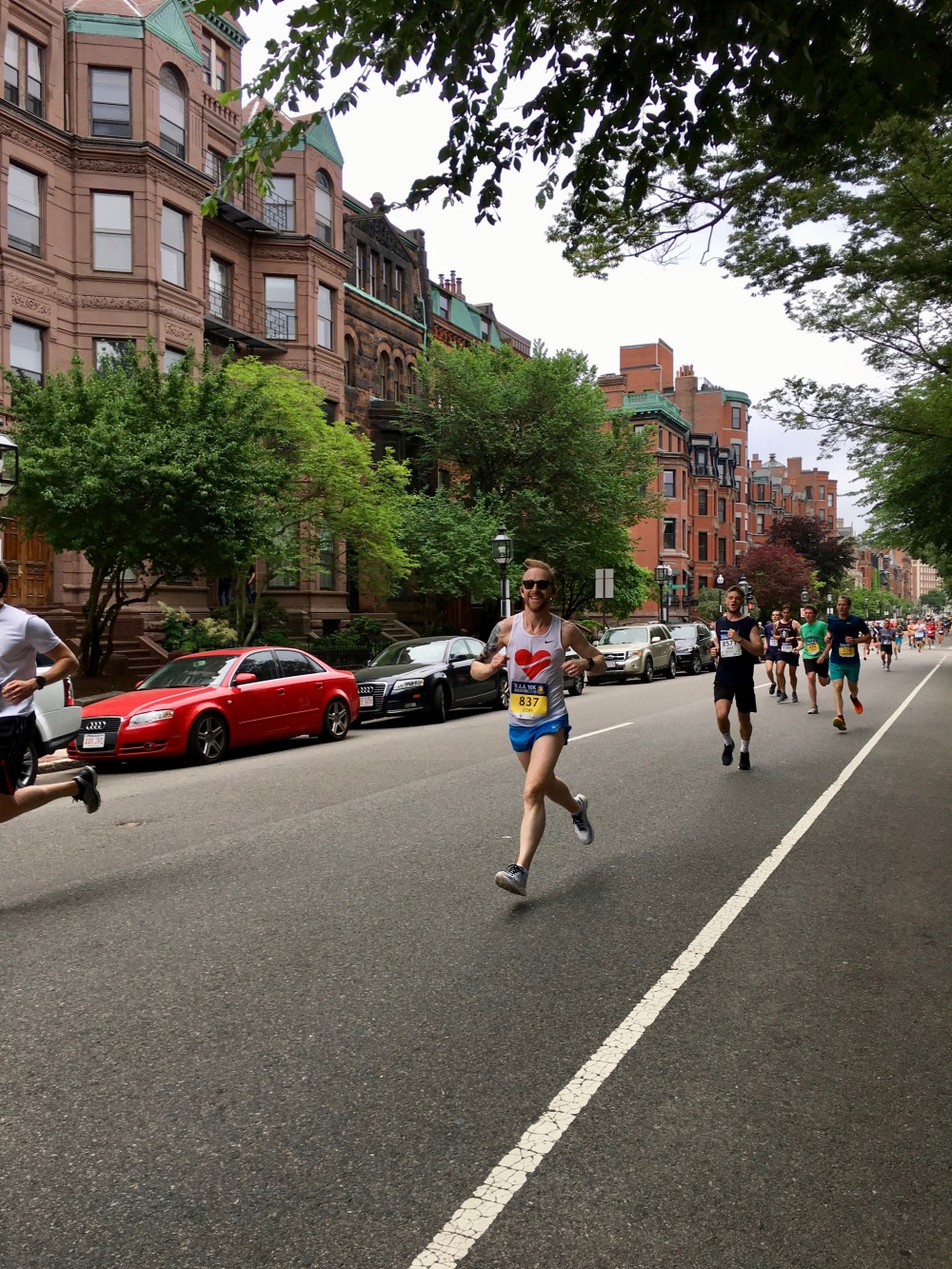 Photo: Me flying down Commonwealth Ave.

Being corralled with super fast people is tricky. Tom, Chad & Logan all took off with the herd and I resisted the urge to follow. I settled into my pace and knew that this race was all about saving gas in the tank for after the turnaround at the half way point. As we passed the first water station I caught sight of Tom again and saw the Heartbreakers cheer squad go crazy as he passed them. They quickly spotted me as well and went nuts. As we approached the Mass. Ave underpass the crew from November Project was there and snapped the shot featured at the top of this post. I passed Tom in the underpass tunnel and later passed Chad somewhere on Bay State. 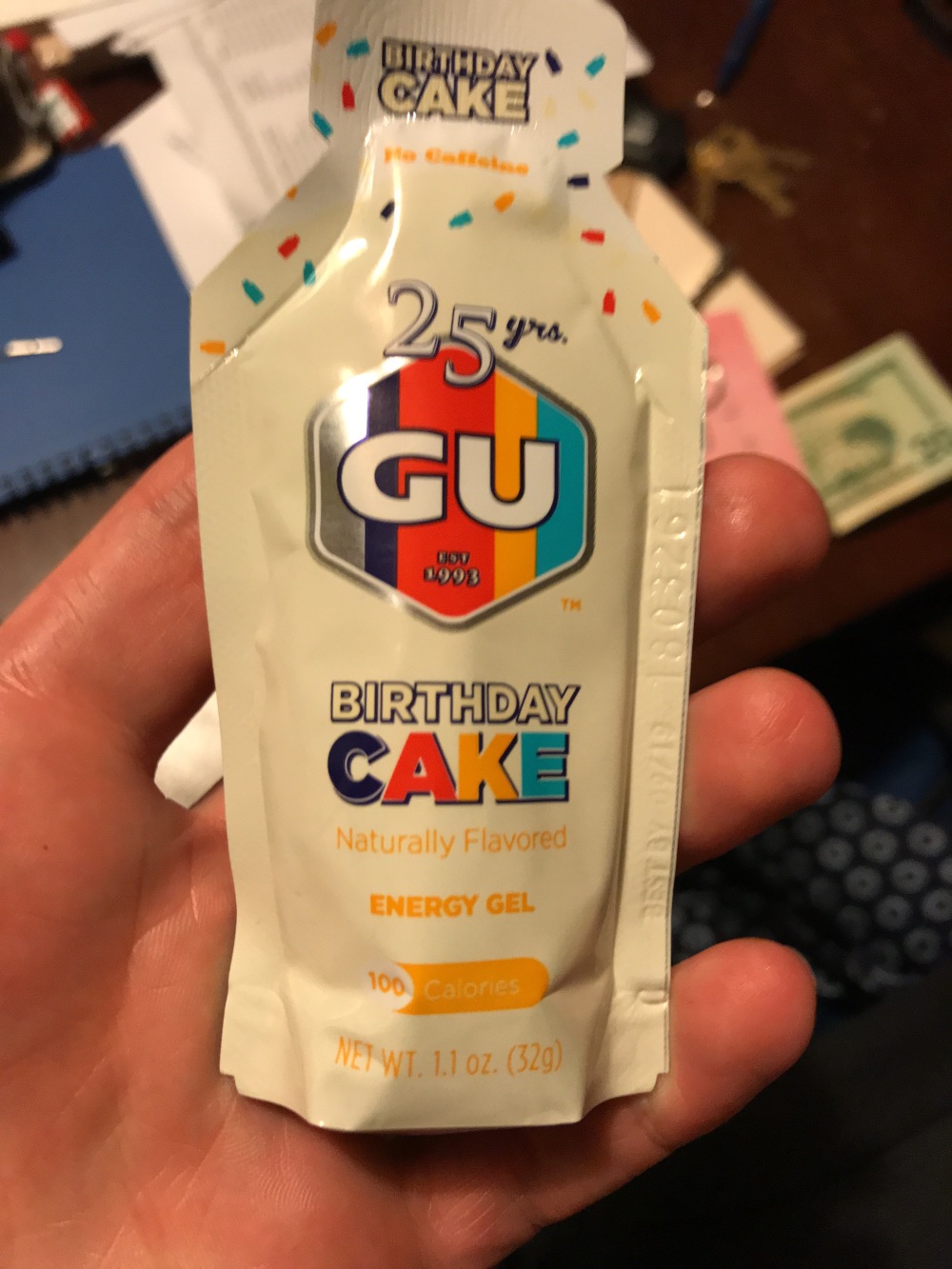 As we approached the 5K time mat and water station I quickly ripped off the top of my Gu and followed with some water so I could get an extra boost to crush the back half. All of my splits had been under goal pace at this point so I knew I just needed to hold pace and I would be golden. After the turnaround I saw Alia and Matt G who were cheering and I got a big boost. I remember feeling pretty tired at this point but I drew on our many track workouts knowing I could run fast while being tired. As we came back into Kenmore I caught up with Logan and told him to finish strong as I passed him on my way towards the last two miles. 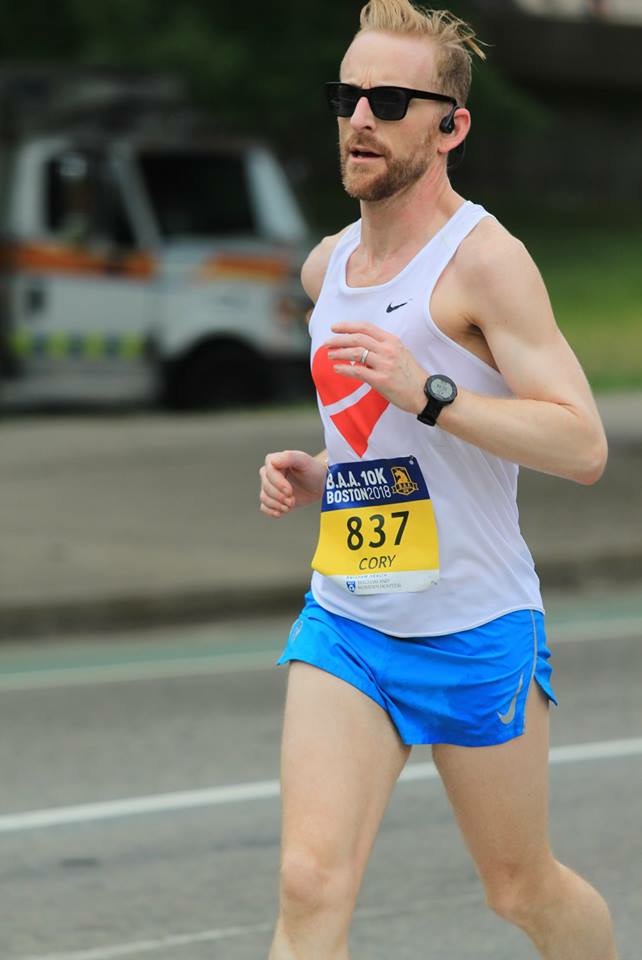 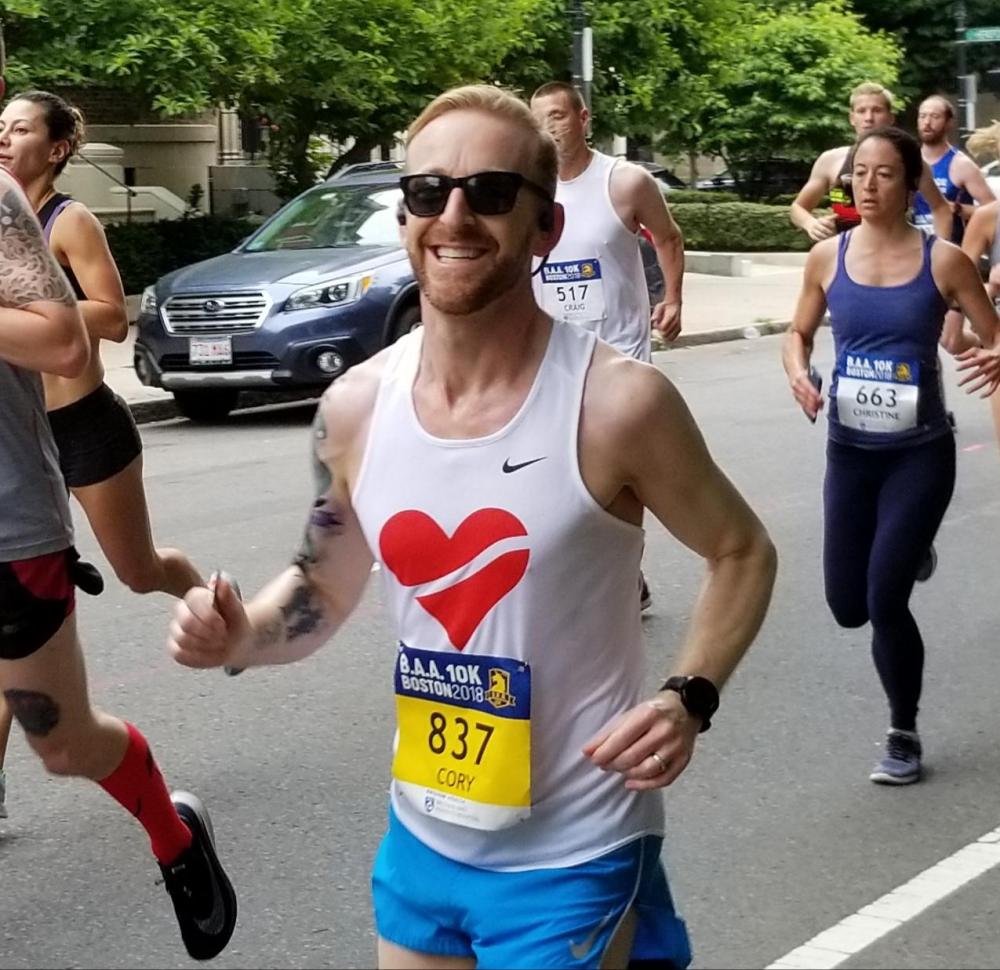 Photo: All smiles with 2 miles to go

As I hammered down Commonwealth Avenue I could tell everyone was gassed. I felt so strong and I knew my teammates were going to be just up ahead. I could feel the happiness of executing my race plan exactly seeping into the expression on my face. The last two miles of the race were my fastest splits of the day (6:48 for mile 5 and 6:51 for mile 6). This is the feeling you dream about in a race. Feeling strong but tired, knowing you’ve expended your energy smartly. 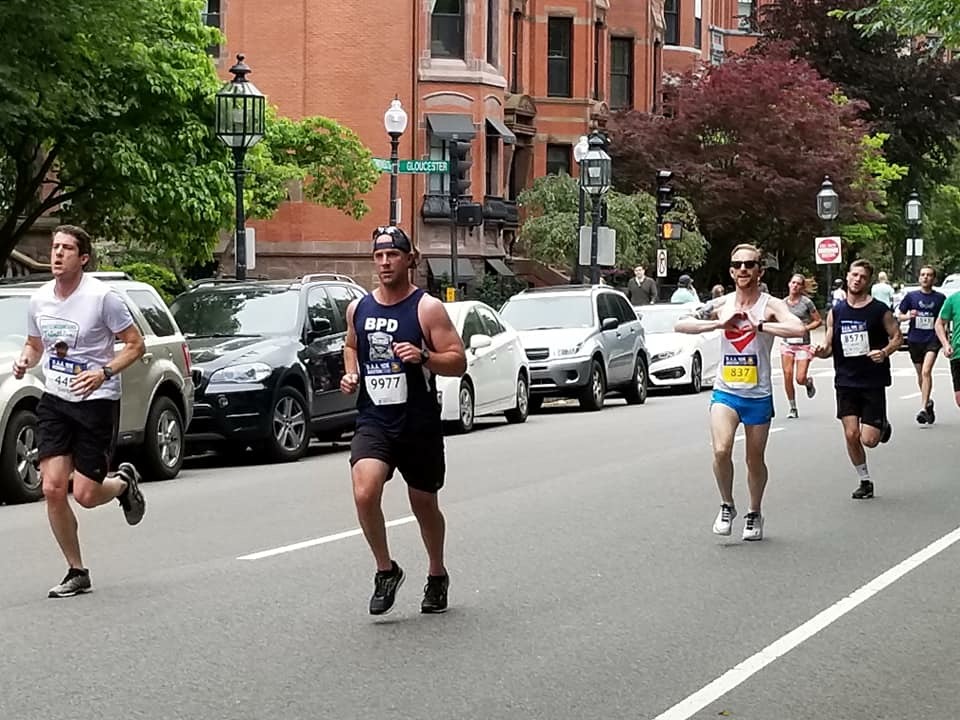 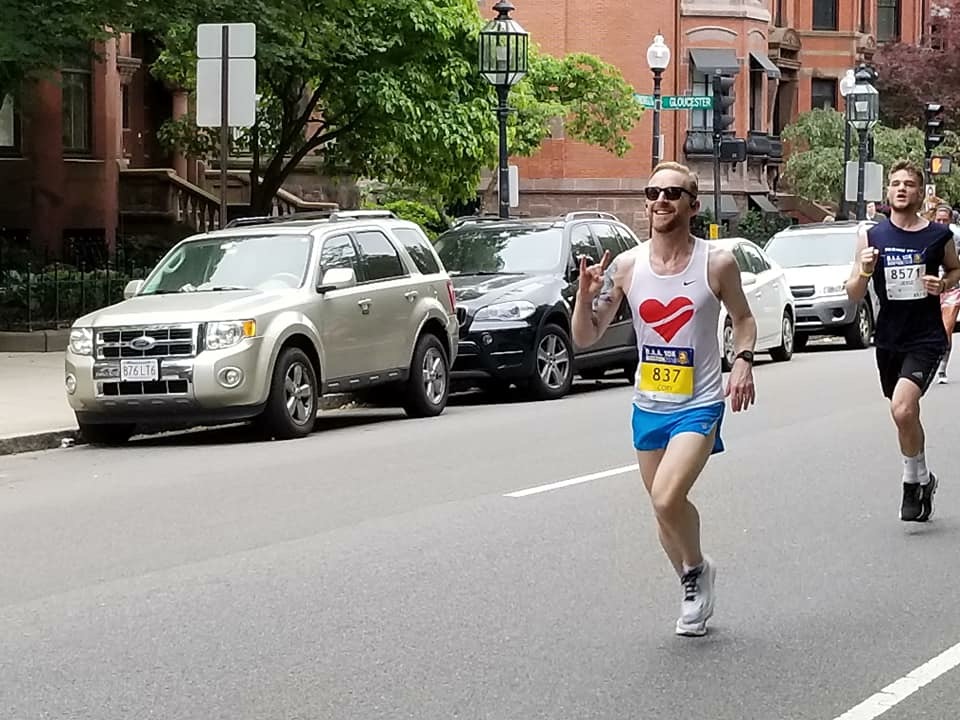 Photo: Me attempting to throw up Heartbreaker symbol then just settling on the rock on one because I’m so bad at it.

As I passed the Heartbreaker cheer squad who had moved to see us go by a second time, I knew that my goal was going to be smashed. I smiled at my friends as I gave one last push wondering how big my PR was going to be. I turned left on Boylston and passed so many people as I flew by the Four Seasons. The wheels were really turning by the time I hit the chute. I felt good and pushed as hard as I could. 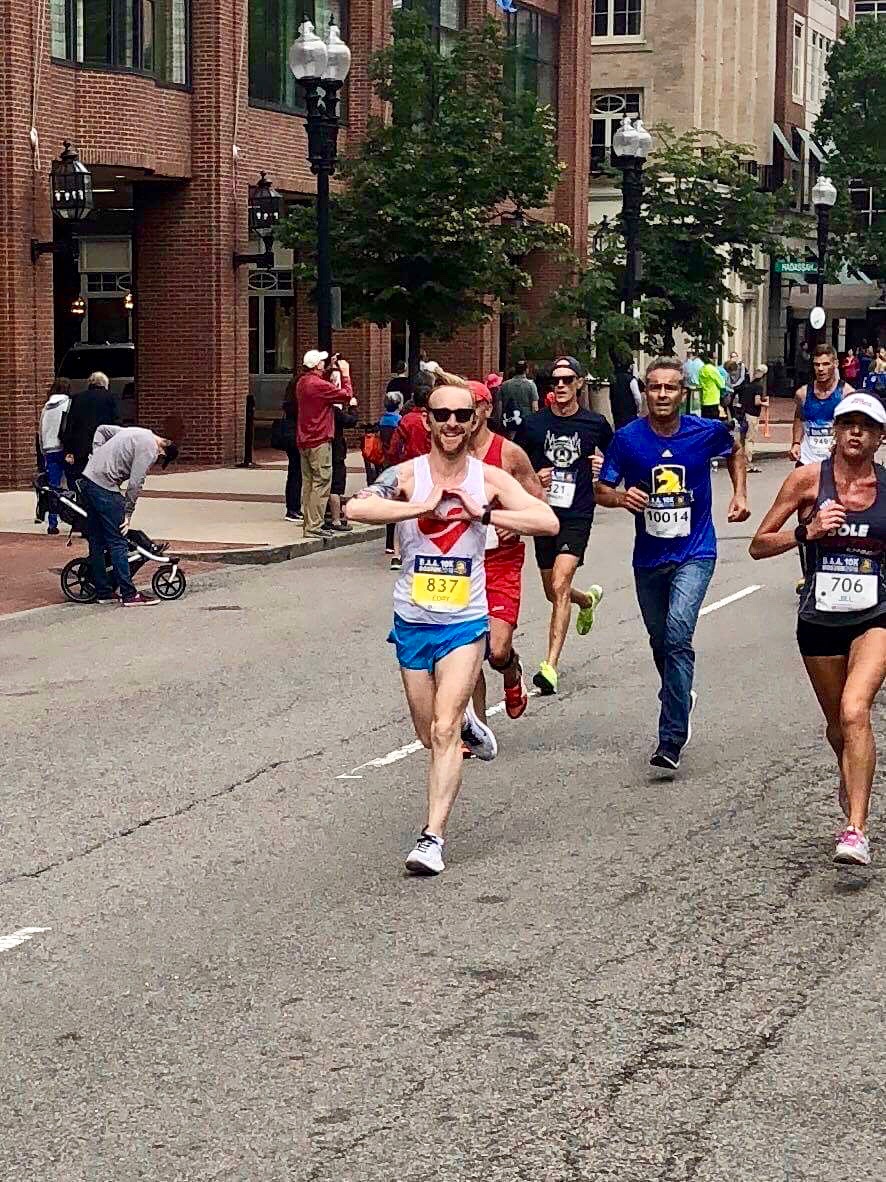 Photo: Me failing yet again at the Heartbreaker sign 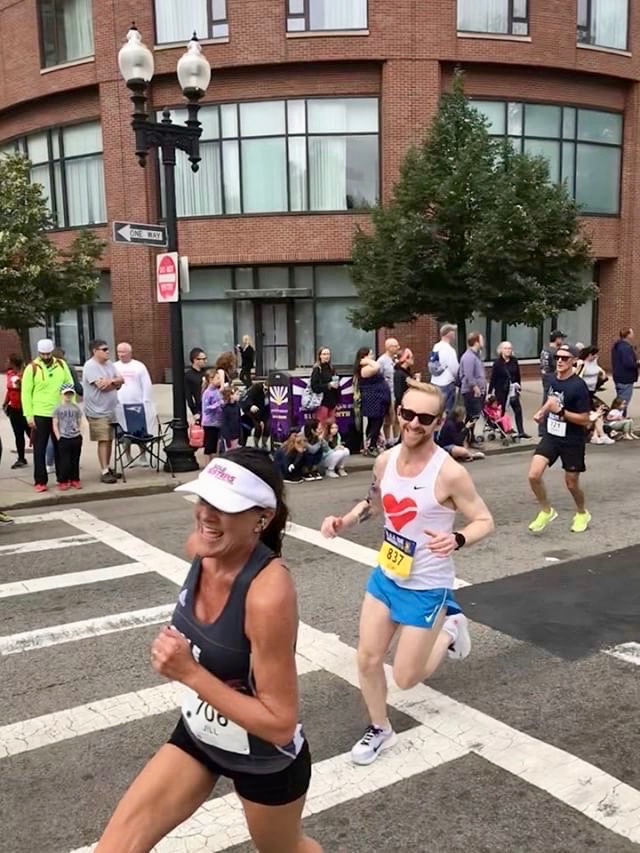 My official time: 42:55 ! I had done it. Another distance checked off my list. I couldn’t believe I had beaten my PR by a full minute and 12 seconds. Three minutes and 35 seconds better than my previous best on this course. I would say I’m surprised but I know that I am growing as a runner. I didn’t know how much I had to learn about hard work until I started running with the Heartbreakers. My teammates and coaches have been key to my success. We show up, work really hard, encourage each other and get faster. So the first stop I made post race was to say thanks to the crew who have given me so much. Love you guys. Bay State Marathon you’re up next. How much time can I shave off my marathon debut of 4 hours and 30 minutes? We shall see. 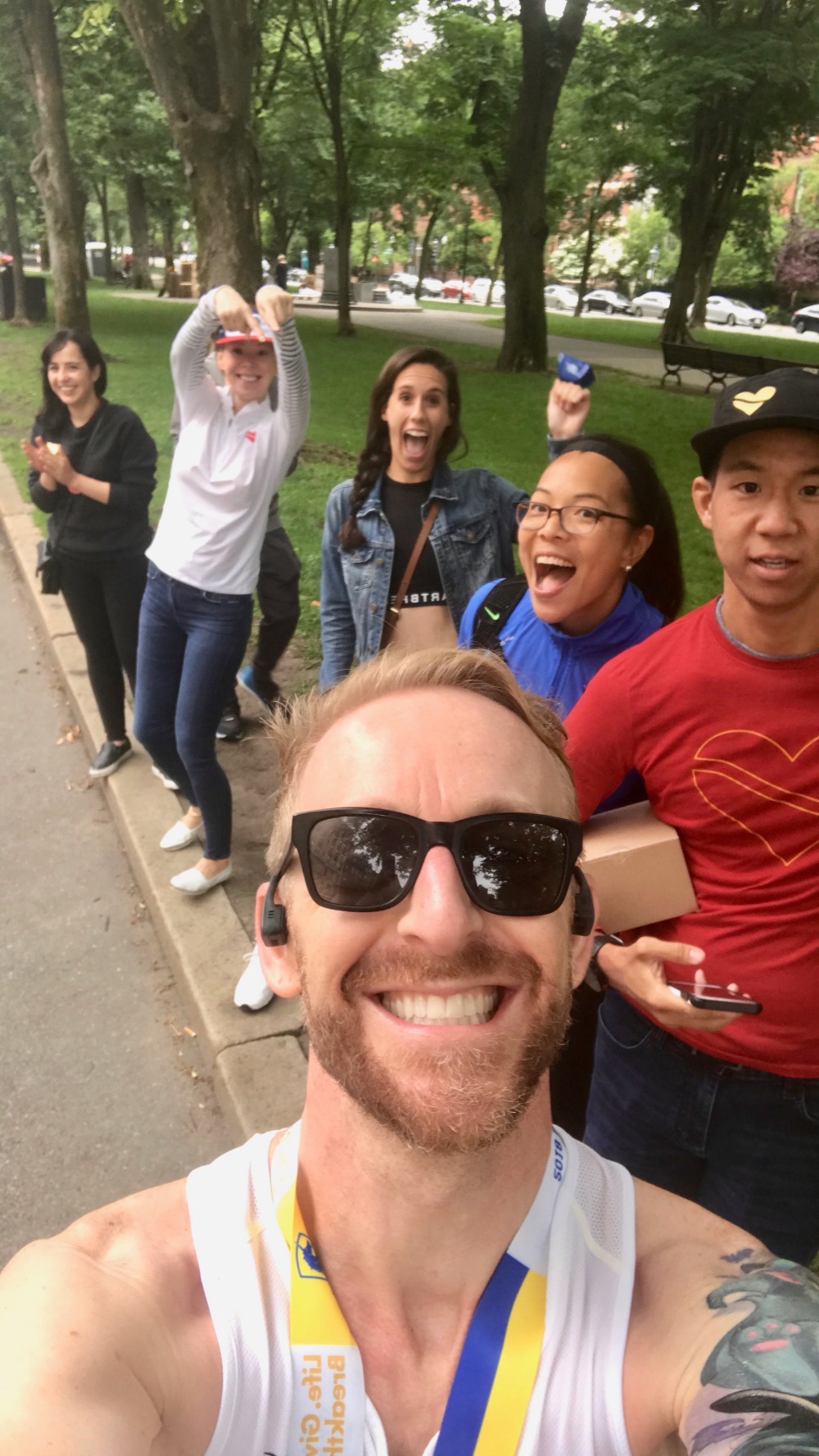 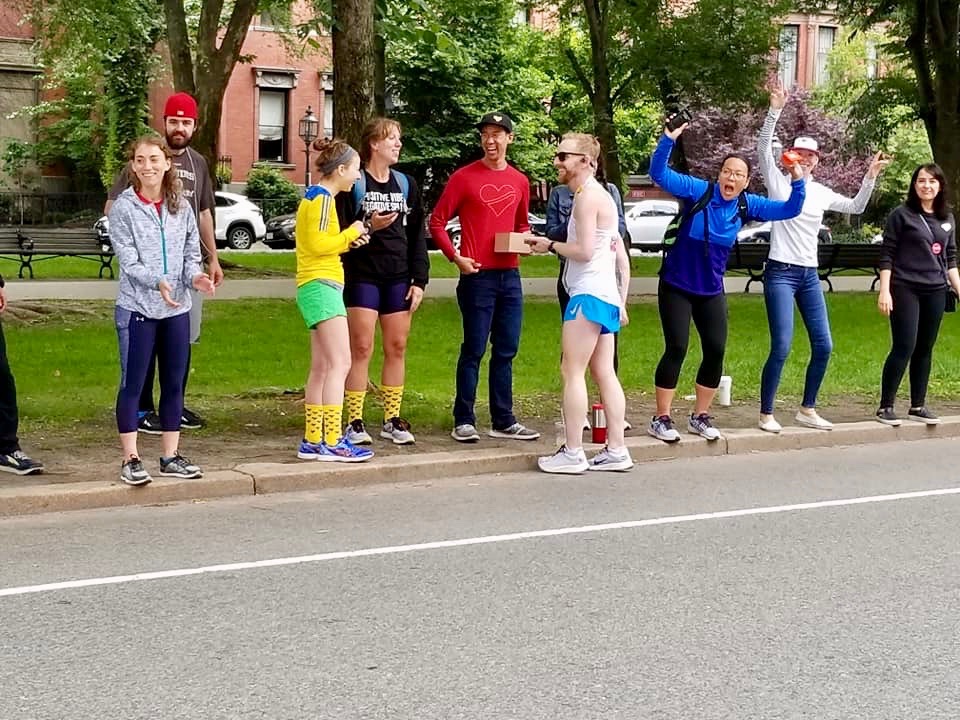 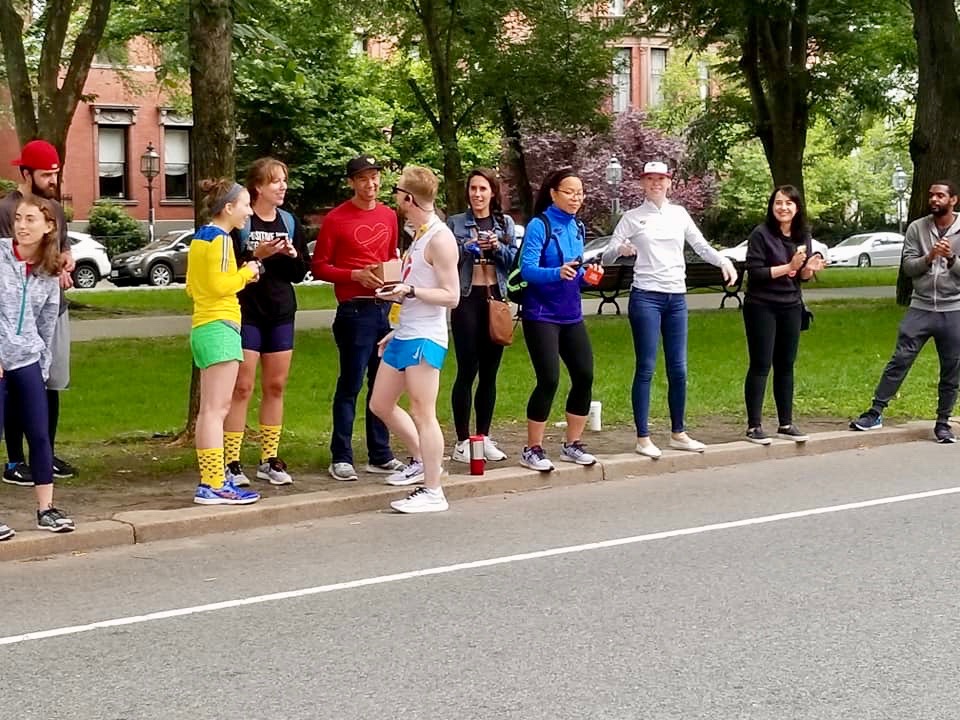