One of the hardest things to deal with as a runner is being injured. Many of us use running to manage our mood and anxiety. Add in a looming race date the stress can really start to get to you. I’ve learned from my past injuries that going back too fast or too hard only seems to make the recovery take that much longer. Sitting around for things to heal up can feel frustrating. I’m always open to new treatments that are designed to speed up recovery using the latest technology or alternative medicines that have been around forever. Here are some of the things I’ve tried/ regularly return to. 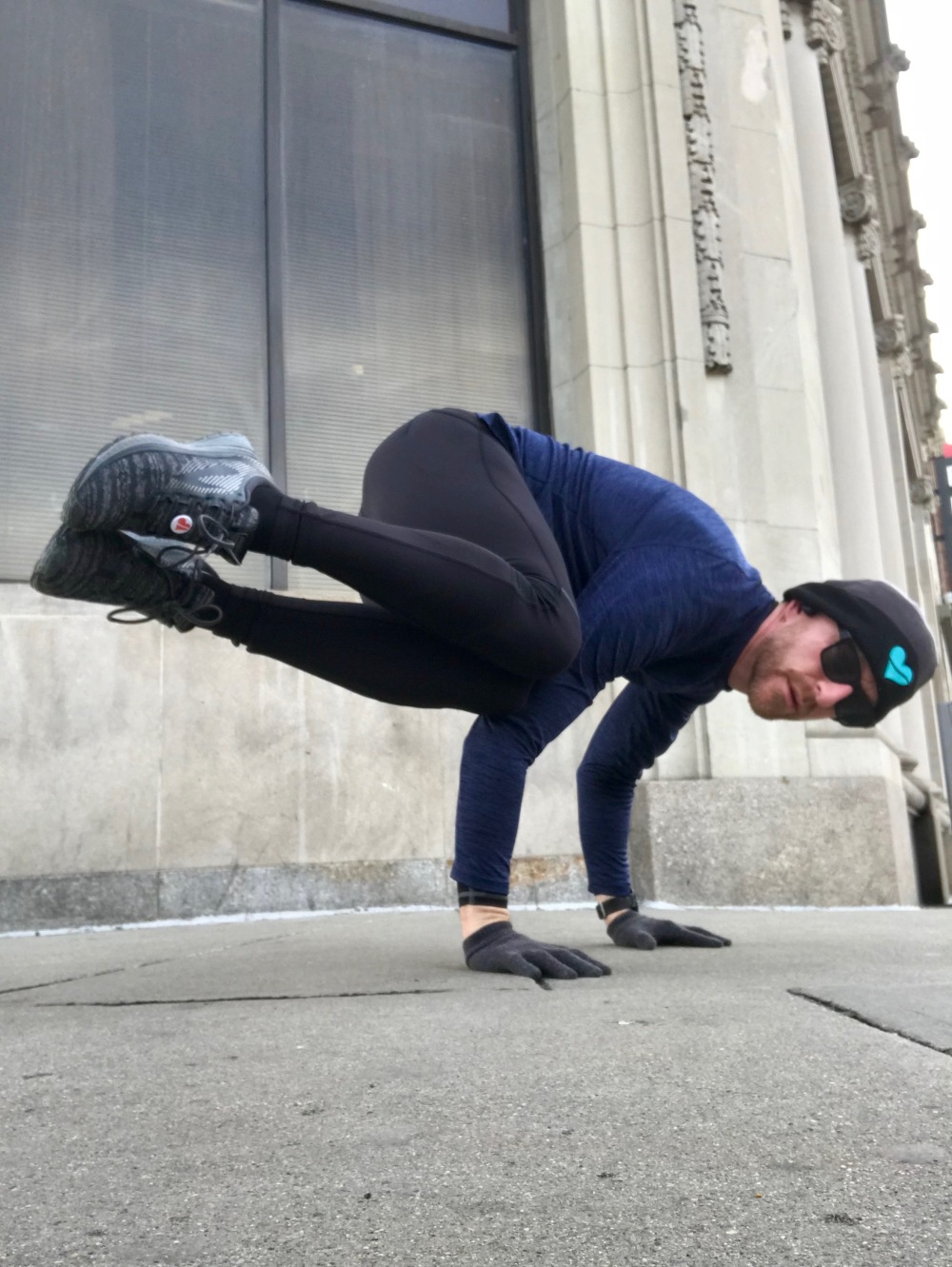 Photo: Me doing an arm balance in the middle of my run

1) Yoga: I’ve had a solid yoga practice for a long time now and it’s something I definitely dive deeper into every time I’m injured. I’ve also practiced enough styles of yoga to know which types are good for certain things I’m trying to balance out. If I can’t run and need a break from the gym, I usually will practice a vinyasa style of yoga. In a vinyasa class, you move with your breath through the various poses. Personally I don’t enjoy “hot yoga” (where the room is heated approximately to the surface temperature of Mercury) as I achieve sweat monster status in a normal class. If I feel banged up and really need to relax, I usually take a Yin or Restorative class instead. In these classes, you hold static poses for longer periods of time to get deep into the connective tissue and fascia. As I’ve intensified my training in running, I’ve found these styles suit me better and really help work out some of the damage that running doles out on my body.

2) Massage: I definitely don’t do this enough. As a hairdresser, I’m on my feet 8 hours a day, using my body in a very physical way. Add on 5 days a week of running and you have sore muscles everywhere. Every time I get a massage I feel like a million bucks for about a week after. I’ve taken yoga classes with Gerard Samson at Coolidge Corner Yoga in Brookline & Sadhana where I live in the South End. I started seeing him for massage when he was finishing up his massage school training a few years back and haven’t had anyone else work on me since. He helped me through my first marathon last year and has helped me work through my current injury. Gerard is great at figuring out just what your body needs. He’s offering deals for new clients so if you want more info click HERE .

Photo: Me in cryo booth with my head sticking out, fog surrounding my head

3) Cryotherapy: My friend Nicole got me a gift card to Cryomed Boston after completing the 2017 Boston Marathon. My calf had been slightly aggravated after the race so I was interested to see if it would help. The theory works the same as ice baths but uses liquid nitrogen to cool the skin in 3 minutes rather than 15-20 in the bath. The technician (not sure if that’s the right term) explained how it worked and told me to get undressed. You keep on your underwear and wear insulated socks and gloves to protect your extremities  with a robe on over it. Once the chamber has reached the correct temp you step in and hand the tech your robe. The first two minutes went by pretty fast but by the last I definitely was doing a dance inside so I wouldn’t freeze. It definitely was invigorating and it most certainly increased circulation in my skin. It was interesting, but at $65 for 3 minutes it’s not really a doable part of my routine. 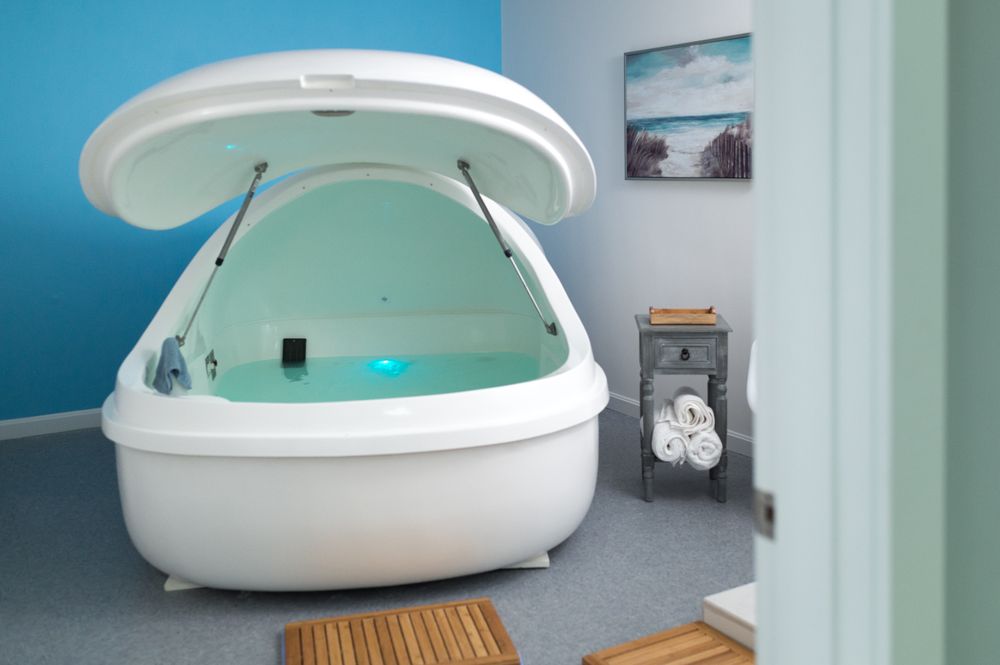 Photo: The float tank at Cloud 9

4) Float Therapy: This is the most recent thing I’ve tried and I’ll definitely return for another visit. Float therapy has been around since the 1950’s but has recently seen a resurgence in metropolitan areas. I visited Cloud 9 located in Jamaica Plain this week and it was really amazing. I showed up and watched a video about what to do and expect ( it was pretty hilarious and made me think I might be going on a vision quest as well as relaxing my muscles). I then went into the room with the float pod and rinsed off in the shower in the room (you shower after and wash your hair after your float, I brought my preferred face cleanser and moisturizer as well) and was ready to float. 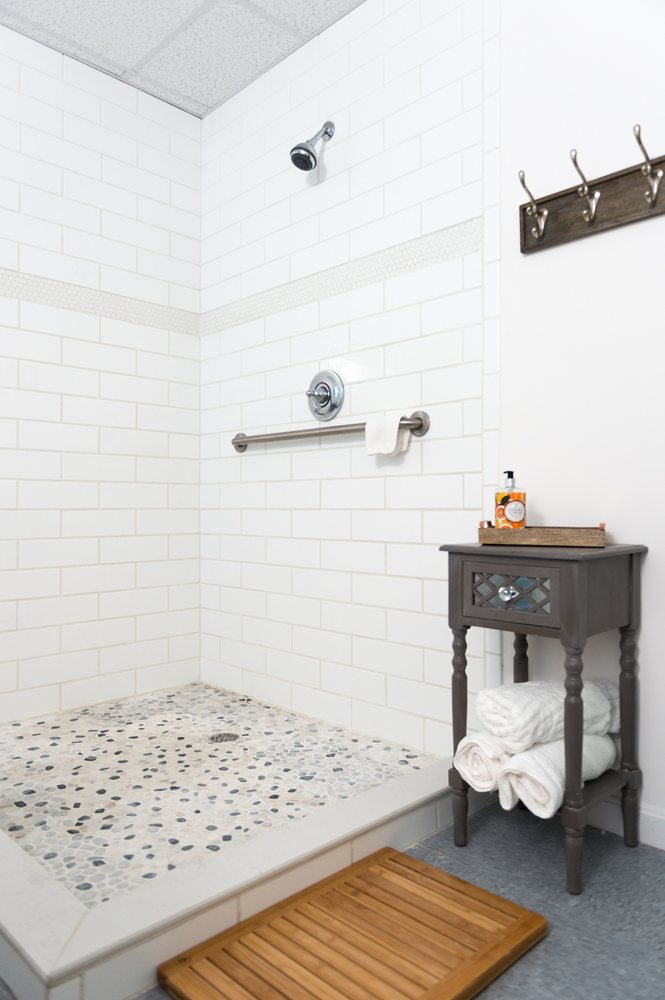 Photo: Shower in the float room

Photo: earplugs and ointment in case you have a cut on body

Photo: Me about to step into pod to float

I wouldn’t say I’m a really claustrophobic person but the tank is a very generous size. I didn’t feel like I was closing the lid on a watery coffin or anything. I’m a little afraid of the dark sometimes so I wasn’t sure how that part would be. I know part of the benefit for your mind is the sensory deprivation so I figured I could shut off the little light and at least try it. The first thing you notice is how buoyant you are. They dissolve hundreds of pounds of epsom salt in the water making floating very effortless, even in the 5-6 inch deep water. I definitely giggled a little listening to my own breath in my head but dropped into my yoga breathing that I do to clear my mind.

I didn’t have lucid dreams or anything like that, but I think I my mind was very active trying to take in the experience. I think when I go again I’ll have an easier time relaxing knowing what to expect. I tried my arms in several positions, each one seeming to release tension in a different area. Towards the end I was definitely drifting in and out of consciousness and feeling really good. I was wondering how much time was left and then clearly had drifted off again when the little light came on to let me know that it was time to get out.

As I felt gravity on my body again I realized just how relaxed I had actually been. I have an overactive brain and this definitely calmed me down and gave me just what I needed. A single float will run you $75 unless they’re offering a special. On May 3rd, they’re having an official Grand Opening party in conjunction with the First Thursday Art Walk. Floats will be $49 that day and you can also buy a session for later on May 3rd ONLY using the code Cloud44 at checkout.

Rest is the obvious missing element here but it’s no less important. Getting rest when you’re healing is paramount and it can’t be stressed enough. What are your favorite things to do when you’re injured? I’d love to hear!